Here are a list of writing prompts that I’ve posted throughout my time on here. I have them sorted and organized by year, as well as the category that they fall into!

Can Be Found Here 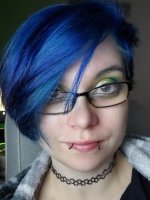